The leader of Manchester City Council has called on the government to take a ‘more strategic view’ of the case for an underground station at Manchester’s HS2 terminus.

His comments follow a 261-page report published by HS2 Ltd, which sets out the financial and practical case for a surface station.

The Bill to create the Crewe-Manchester section of the high-speed train, which offers a six-platform aerial station in addition to the existing Manchester Piccadilly station, passed its second reading in the House of Commons last week. municipalities.

It will now move to committee stage, where Manchester City Council and the Greater Manchester Combined Authority will apply for an underground station, which they say would free up nearly 500,000m² of prime development land in the city centre. town.

The Department for Transport has repeatedly said an underground station would be too expensive, saying it would cost an additional £5 billion.

The basis for this figure was revealed earlier this week with the release of a report from HS2, who compared the case of an above-ground station with different underground designs, concluding that the former was preferable for reasons of cost, safety of construction, and speed of delivery.

The report considered three options for an underground station at Piccadilly – shallow cut and cover, deep cut and cover, or a combination of deep construction and mining.

According to the report, all underground options would require greater volumes of material delivered to and from the site, resulting in at least 13,500 additional HGV trips to and from the city – assuming that 90% of the excavated material could be removed by rail. .

The authors estimated that the most successful design of the underground stations would cost £11.4 billion – compared to the planned surface station of £7 billion – and would be completed at least seven years later than the date of current delivery of 2036.

The assessment focused on the construction costs of the station itself, saying: “HS2 Ltd do not believe they are best placed to carry out further work on wider benefits or commercial development in outside the building limits”. 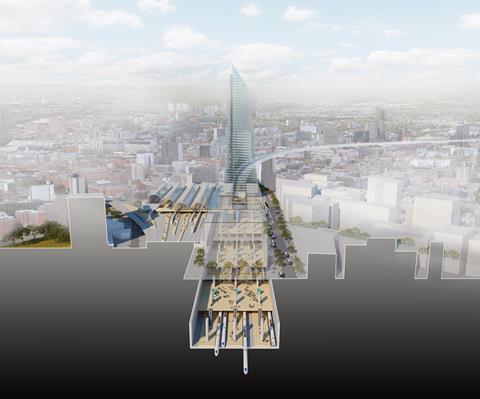 But Bev Craig, leader of the City Council, said the analysis failed to take into account the wider economic impact of an underground station, which she said would bring in an extra £333m each year to the region.

“Our argument remains that it is essential to look at the value for money of the station throughout its lifespan,” she said. “We encourage HS2 Ltd and the government to take a longer term and more strategic view.”

She added that while the board was still reviewing the details of the latest HS2 report, it was “fair to say” that while the company had shared its estimated costs for a tube station, it had not shared the basis of how which this figure was. arrive at.

“We remain convinced that an optimized design could offer an underground station for much less,” she added.

These are agreed changes to the scope of work under the £1.2bn contract.