Tunneling for the final phase of Toronto’s ambitious light rail program has begun.

Joronto is a sprawling metropolis on the shores of Lake Ontario in eastern Canada inhabited by nearly 7 million people. In recent decades, it has experienced rapid economic growth based on high-tech industries. This sustained growth has pushed urban transport to its limits, wwith a key missing link requiring urgent attention.

Two tunnel boring machines (TBM) are now in operation on the £460m Eglinton Crosstown West extension. This is the second phase of a light rail line that should eventually solve many of the city’s congestion problems. The tunnels will represent 6.2 km of this overall 9.2 km phase.

“There is only one East-West metro line in service, and there is a gap in the rapid transit network. More capacity is urgently needed.

Metrolinx’s answer is the new east-west light rail transit system. It will pass through the urban center and provide the thriving western municipality of Mississauga and the high-tech hub around Toronto’s Pearson airport with much improved access to downtown Toronto.

In June 2013, work began on the 10 km tunnel of the first phase, the 19 km Eglinton Crosstown LRT, which includes 25 stations, five of which are interchanges.

Joint venture design, build and finance firm Crosslinx Transit Solutions (CTS) – made up of 26 companies – completed the operation in December 2016 and the line is scheduled to open fully next year.

The tunneling of the first phase was divided into two sections. Four Caterpillar earth pressure tunnel boring machines were deployed in 2014, working 20m below ground level. Among the challenges were two interchange stations where the tunnels pass under an existing metro line (see box).

There were issues with groundwater and aging buried infrastructure on the route. As the line largely followed the Eglinton Avenue alignment, inevitable width restrictions and lane closures meant traffic jams were a constant irritant for commuters and contractors.

As problems and delays piled up, the relationship between Metrolinx and CTS began to deteriorate. Both sides resorted to legal action and a settlement was agreed in September 2018, but overall progress has been even slower than initially expected.

A key factor in the delays cited by the contractor was that the start of work was delayed by nine months while Metrolinx obtained permits and carried out essential utility work. The pandemic was another key factor.

Nasir Qureshi, Metrolinx Senior Project Manager, Tunnels, says a lot has been learned from the first phase and the lessons have been used to ensure the second phase goes more smoothly.

“For the extension, we offered significant financial incentives to speed up the contract – there were bonuses for assembling the tunnel boring machines and completing 50m of tunnel within 12 months of contract award. And we had a lot of preparatory work completed well in advance.

“One of the main decisions was to buy a 6.5 ha greenfield site at the western end of the project. This had enough room for the TBM launch shaft, as well as all essential support services. 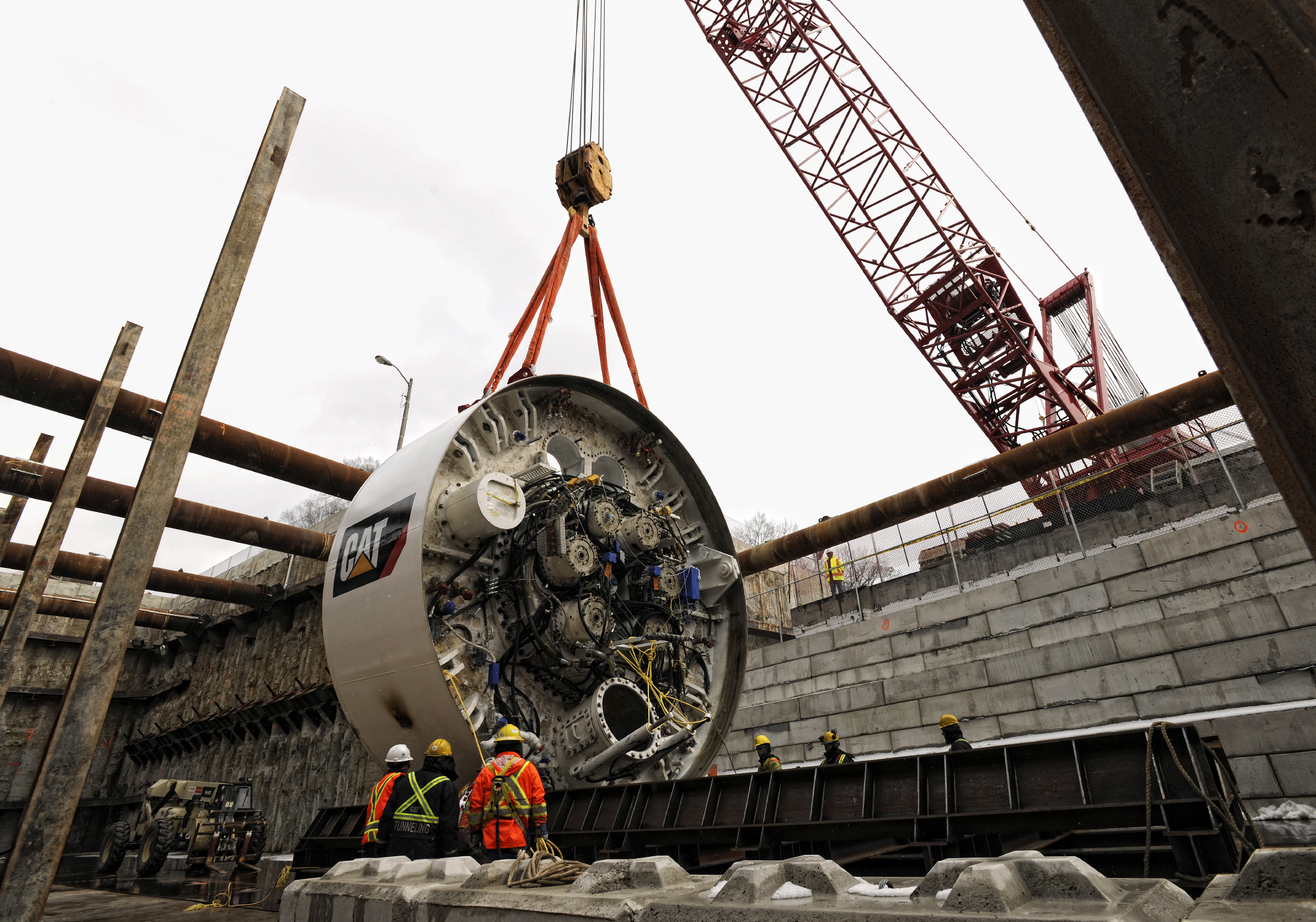 “We installed an 11 MW power line to meet the needs of the tunnel boring machines, a water supply, a storm water management system and we erected heated sheds to store the liner segments during the winter.”

He adds: “All of this was in place when the contractors arrived on site.”

There will be seven stations along the route of the second phase, known as the West Extension. Two are interchanges with other transit lines in the Greater Toronto Area. Four will be underground, two elevated and one at ground level.

West End Connectors, a joint venture of 10 companies, won the Phase 2 design, build and finance contract in May 2021.

Its construction activities are carried out by Aecon Infrastructure Management, Dragados Canada and Ghella Canada.

The ground conditions of the second phase should be very similar to those encountered during the first and substantially the same as on other projects in Toronto. These were confirmed by further investigation on the site.

“Basically it’s about 50% shale, 50% a mix of sandy clay, silt and fractured rock,” Qureshi says. “With this improved information at their fingertips, contractors could design their TBMs with confidence.”

Earth pressure tunnel boring machines are a popular choice for digging tunnels in soft ground, especially in urban areas where ground subsidence needs to be minimized. They can withstand up to 7 bars of groundwater pressure at the face, which is balanced by the excavated material, usually mixed with additives such as bentonite or polymers. The balance is maintained by the relationship between the rate of advancement and the rate of extraction from the front.

On these latter workouts, Metrolinx predicts a frontal pressure of no more than 5 bar. “This phase should be easier than the first,” says Qureshi. “It won’t have to pass under a subway line and there is a clear underground alignment.”

JRadiationally, most trips to downtown Toronto use a North-South axis

Another advance over the first phase is the manufacture of precast concrete segments. For the first time, these were produced nearly 300 km from the site – a long distance, even by Canadian standards. For the second phase, Metrolinx found a suitable precast concrete producer 70 km much closer.

CSI Forterra Canada will produce the over 7,000 segments required. The liner design has been used successfully on previous projects in Toronto. Concrete reinforced with steel fibers and high-strength polymer fibers is specified and strict quality assurance systems are in place.

“Assembling the TBMs and excavating at least 50m of tunnel within 12 months of contract award was a very aggressive schedule which put a lot of pressure on our management team. But we succeeded. »

For extension, we offered significant financial incentives to accelerate the contract

Triana reports that currently tunnel boring machines are encountering soft shale – no real problem given that Herrenknecht machines can develop 5,000 kNm of torque at the cutter head. He expects harder shale further along the line, as well as softer variable soils documented in the site survey. This “mixed face” excavation is one of the trickiest forms of tunneling, but Triana is confident that its experienced multinational team can handle it.

He describes the western launch site as a “luxury”, especially when working in an urban environment under one of Toronto’s busiest roads. Another bonus is the availability of an elaborate section of a local quarry where spoil from the project is used for landscaping.

Leaks in the tunnel should be avoided at all costs, due to the real risks of ice forming during Toronto’s notoriously cold winters. This can fall on passing trains below and is a safety hazard. An annular cement/bentonite grout is injected behind the segments to prevent water entry no more than 12 hours after installation of the precast liner. Towards the end of the workouts, this slurry will need to be pumped up to 6 km from the launch site, so mix design is critical.

The tunnel boring machines currently reach about 10 to 15 m per day, 16 to 20 m below ground level. Tunneling should be completed in just 20 months.

The western extension may not be the last on the LRT. Plans to extend the line an additional 4.7 km to Pearson International Airport are also under consideration.

The first east-west phase of the Eglinton Crosstown Line runs twice under Toronto’s busiest subway line, the North-South Toronto Transit Commission’s Yonge-University Line 1. The maximum deflection of the above metro tracks has been specified at 2mm.

New interchange stations had to be built alongside existing Line 1 stations at Eglinton and Cedarvale. The new and old lines intersect at approximately 90⁰, which minimizes their interface.

The Eglinton station will be 17 m deep, 14 m wide and 260 m long. Work began in 2019 with the installation of two rows of massive steel piles 44m deep and 1.5m in diameter along the tracks of Line 1. These were connected by longitudinal steel beams. I in steel 1.8 m deep parallel to the tracks. Narrow transverse galleries were dug underneath by a small remote-controlled excavator and temporary hydraulic supports were installed at 1.5m centers with a shotcrete liner. 23m long steel needle beams were then threaded through the galleries to connect the two longitudinal beams, forming a massive cradle.

Once the cradle was completed and the metro line secured, the temporary hydraulic supports were removed. The support exercise lasted 16 weeks, after which the excavation of the new box of the station could begin.

A combination of well points, shotcrete and ground anchors took care of the ground conditions, which was mostly sand and fine material.

Concreting of the Eglinton station platform level has begun at a depth of 23 m below grade. A lobby-level slab was constructed above. Throughout the process, no significant deviation on the metro line was detected.

Do you like what you read? To receive daily and weekly New Civil Engineer newsletters, click here.