Iran is building a vast new network of tunnels at its Natanz nuclear site that could house a massive enrichment facility that would be impervious to bunker busters and cyberattacks, The New York Times reported Thursday.

The report says the US and Israel have been monitoring construction at the site for several months, but have refrained from public comment, except for a brief remark made last month by Defense Minister Benny Gantz. .

“At this very moment, Iran is working to complete the production and installation of 1,000 advanced IR6 centrifuges at its nuclear facilities, including a new facility being built at an underground site near Natanz,” he said at a conference in Herzliya. Reichmann University.

Gantz’s public comments surprised US and Israeli officials, the report said. Iran has not denied the accusation, having previously said it was building new facilities in response to attacks on the existing Natanz site blamed on Israel.

Satellite images released recently by research groups show that the new facility is close to the old center of Natanz, but buried much deeper under a mountain, like the Fordow plant. Efforts to attack such a site would require the most advanced bunker busters, which Israel does not yet possess.

The report notes that Americans and Israelis differ sharply on the severity of the construction’s implications.

Biden administration officials told The Times they had been following the construction for more than a year and were not particularly alarmed.

They pointed out that the facility, which would be buried deep under a mountain, would not be ready for several years, giving the Americans time to deal with it, either through diplomacy or by force if necessary. .

They believe the main purpose of the new facility is to replace the centrifuge facility that was badly damaged in a sophisticated attack last year blamed on Israel.

And while he would play no part in Iran’s capabilities to build a nuclear weapon in the near future, Tehran was using his existence to pressure the United States into making concessions in talks on a return to nuclear weapons. nuclear deal.

Talks between Iran and world powers in Vienna to revive the 2015 nuclear deal have stalled.

The nuclear deal collapsed four years ago when former US President Donald Trump withdrew the United States and imposed crushing sanctions on Iran. Meanwhile, Iran has greatly expanded its nuclear work, while insisting it is for peaceful purposes.

“The Iranians’ highest priority is to use the nuclear threat to obtain concessions, economic and otherwise,” Gen. Kenneth F. McKenzie Jr., the recently retired head of US Central Command, told The Times.

They see it as further proof of Iran’s efforts to obtain nuclear weapons capabilities and vindication of Israeli efforts to thwart the program, the Times said.

The report says the construction could be behind what it calls accelerated Israeli efforts to thwart the program, referring to several recent attacks on Iranian scientists and engineers blamed on Israel.

He also noted that construction of the new site began around the same time as the assassination of the father of Iran’s nuclear program Mohsen Fakhrizadeh, which was also blamed on Israel.

In his recent speech, Gantz said Iran was only “weeks away” from accumulating enough fissile material for a bomb. 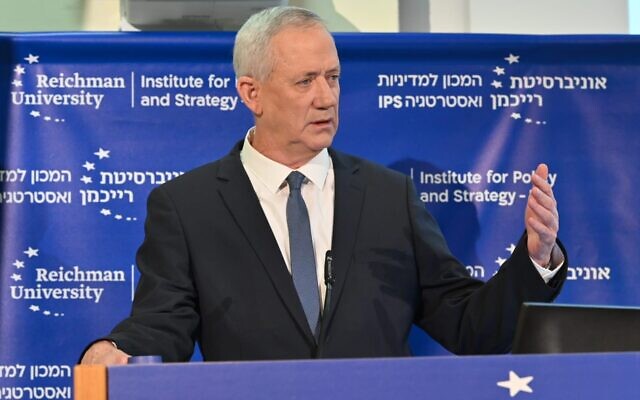 Defense Minister Benny Gantz speaks during a conference at Reichman University in Herzliya, May 17, 2022. (Gilad Kvalarchik)

“Iran continues to accumulate irreversible knowledge and experience in the development, research, production and operation of advanced centrifuges,” Gantz said.

“It is only weeks away from accumulating sufficient fissile material for a first bomb, holds 60 kg of 60% enriched material, produces uranium metal at the 20% enrichment level and prevents IAEA to access its facilities. “, he added, before revealing the construction to Natanz.

The report quotes several Israeli officials as saying they believe Iran’s ultimate goal is to use the facility to enrich uranium on a large scale, using new advanced centrifuges.

US officials admit the new facility is quite large and generally well-protected, the Times said.

But while the West was largely focused on Iran’s nuclear program, General McKenzie warned that the main current threat came from Iranian ballistic missiles, cruise missiles and drones, which he called the “jewels of the crown” of Tehran.

“And that’s where they’ve made tremendous progress over the last five to seven years,” General McKenzie said, “where they now realistically have an overshoot of their neighbors.”

You are a dedicated reader

We’re really glad you read X Articles from The Times of Israel over the past month.

That’s why we started The Times of Israel ten years ago – to provide discerning readers like you with must-read coverage of Israel and the Jewish world.

So now we have a request. Unlike other media, we don’t have a paywall in place. But since the journalism we do is expensive, we invite readers to whom The Times of Israel has become important to support our work by joining The Times of Israel community.

For just $6 a month, you can help support our quality journalism while benefiting from The Times of Israel WITHOUT ADVERTISINGas well as access Exclusive content only available to members of the Times of Israel community.

Thanks,
David Horovitz, founding editor of The Times of Israel