Transport for London has radically backed away from its planned Central Line closure tonight – just minutes after warning furious commuters that the line would close at rush hour.

TfL had previously informed customers that no trains would run on most of the line except for a shuttle service between Leytonstone and Epping/Hainault due to a shortage of staff.

But minutes after a public backlash erupted, the operator of London’s Tubes and buses backtracked and said trains would run to all stations as normal after “finding cover”.

A TfL spokesman said: ‘Coverage has been found and a normal central line service will operate until the end of the evening.’

TfL sources denied the U-turn was linked to public backlash – and added that staff absences were due to illness, but were not Covid-related.

Previously, passengers had been furious that they only received four hours’ notice of the closure, which would likely have caused travel chaos.

One tweeted: “What a shame. TfL just sent an email stating that the central line will close at 5.30pm today due to ‘staffing issues’. It’s a working day in the capital. @MayorofLondon, keep your head in shame.

‘So @TfL @MayorofLondon again, it doesn’t matter if you have plans – you COULD get home SAFE, but ultimately you don’t care. It’s appalling. 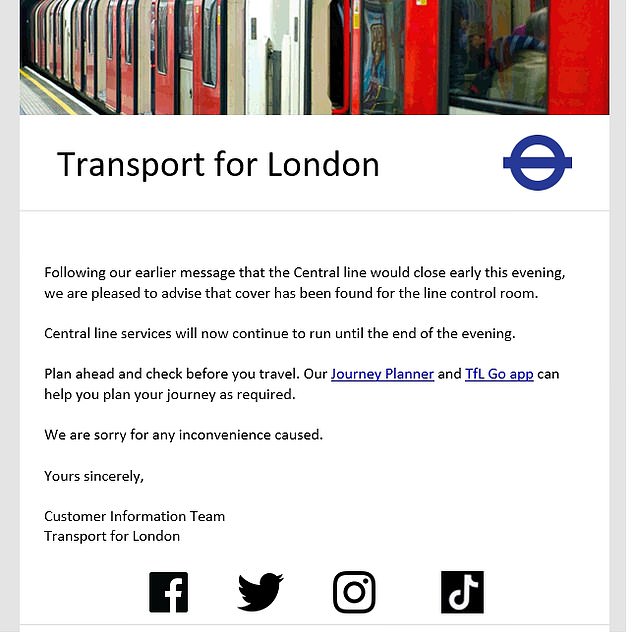 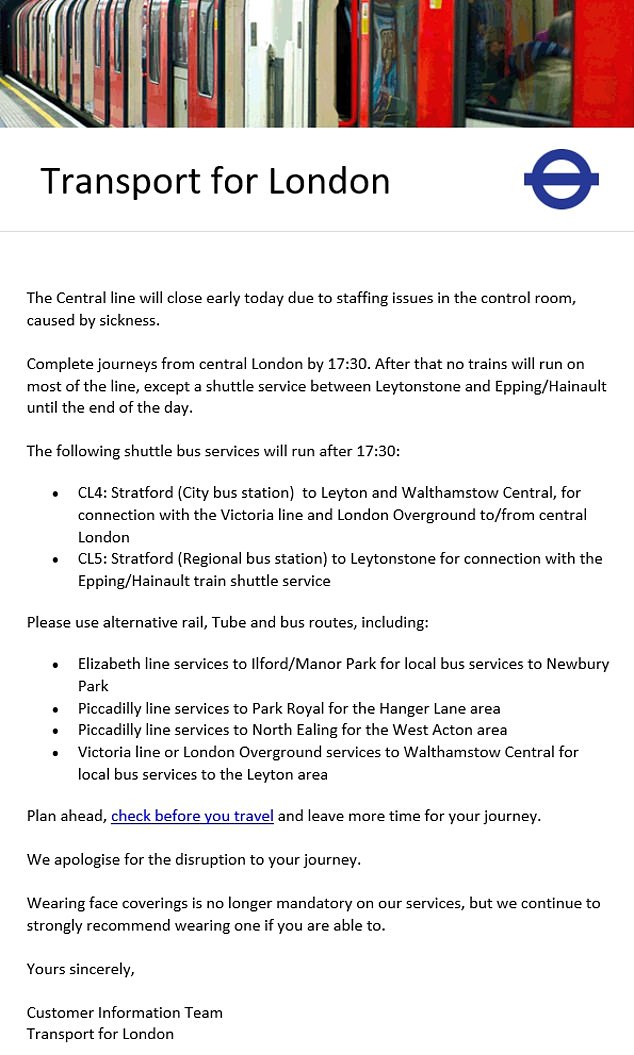 Transport for London announced the closure of the Central Line in an email at 1.15pm today – but later turned it around

A message believed to have been sent by Des Friel, service control manager for the Central and Waterloo & City lines, was tweeted at 12.20pm today about the shutdown.

The note read: ‘Unfortunately, due to high levels of illness, we will be suspending the central line tonight.

“The last trains through central London will be around 6pm westbound from Liverpool Street and 6pm eastbound from White City.

“If we manage to find additional SRT staff, we will organize a shuttle service between Leytonstone and EPP / Hainaut only.

“Once we have confirmed timetables and train numbers for the final trains, we will share them with you.”

‘SRT’ stands for Special Requirements Team – part of TfL which provides a team of mobile station staff for upgrades and projects – and ‘EPP’ stands for Epping Station.

The news was originally announced by Greater Anglia in a 12.30pm tweet that some on Twitter thought was a month old, following the RMT Tube strike on June 21.

The tweet read: “Please note that the London Underground Central Line will be closed from 5.00pm today with a full closure expected at 6.30pm.”

“TfL advises completing travel as soon as possible as there will be no service available.”

But Greater Anglia confirmed to MailOnline that the tweet was correctly posted and was based on advice given to the operator by Transport for London’s control room.

TfL also confirmed to MailOnline that the information was correct and that communications from passengers announcing the late notification change would follow soon.

But it took until 1.15pm for the news to be announced in an email, which read: ‘The central line will close early today due to staffing issues in the control room, caused by illness. Full journeys from central London by 5.30pm.

“After that, no trains will run on most of the line except for a shuttle service between Leytonstone and Epping/Hainault until the end of the day.”

The statement added: ‘Plan ahead, check before you travel and allow more time for your trip. We apologize for the disruption to your trip.

“Wearing face masks is no longer mandatory on our services, but we continue to strongly recommend wearing one if you can.”

It comes after major disruption over the past three days in London King’s Cross, Euston and St Pancras caused by the heat wave. 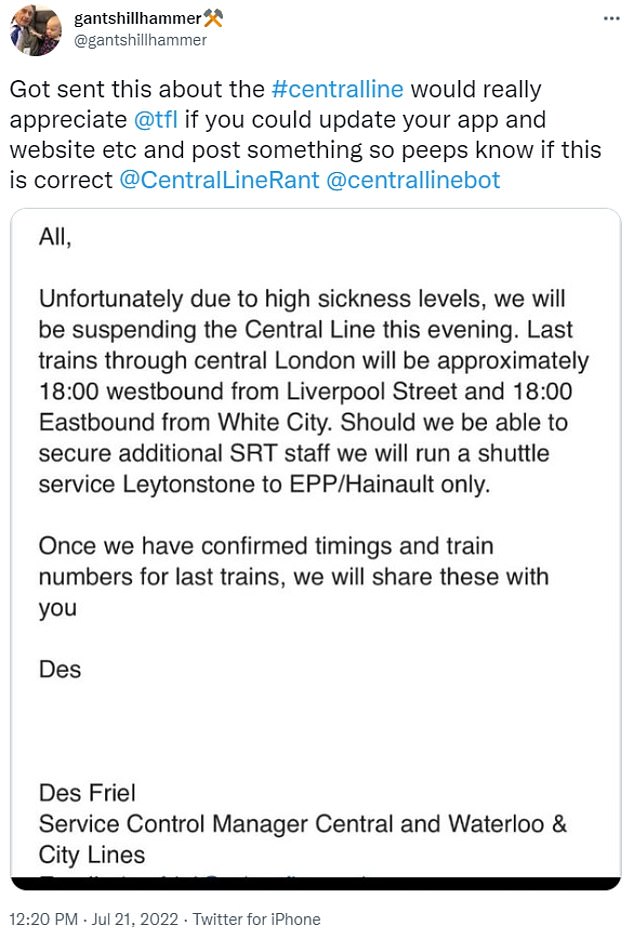 A message believed to have been sent by Des Friel, Service Control Manager for the Central and Waterloo & City lines, was tweeted at 12.20pm today about the Central line closing

The tweets above were all posted before TfL officially confirmed the shutdown at 1.15pm.

Although Covid rates have soared in recent weeks, causing workplace chaos across the UK, the number of infections is no higher in London than anywhere else.

Reliable surveillance data shows that around 5% of people living in the capital were infected last week, matching the national average.

Cases were higher in the east of England, the West Midlands and the South West, according to the Office for National Statistics.

Experts now believe the current wave has peaked in recent days, meaning it is now receding naturally – with no restrictions being introduced.

Is Ohio’s income inequality bad for the economy?