One day in February 2020, I found myself biking on Clark Drive in Vancouver — a busy, car-heavy thoroughfare — with a binner named Steve Nelson. We were cycling to a scrap yard to recycle some metal he had picked up. As I scanned the road to make sure a tractor-trailer passed us safely, Nelson continued to talk friendly to me about the price of steel these days. Riding off the beaten path is something I love to do as a bike mechanic and avid cyclist, but I never expected to end up pedaling the busiest trucker’s road in Vancouver. My goal that day was to spend time with Nelson to see how his work has brought him to the city and learn more about how the city’s infrastructure and policies could better support low-income cyclists. .

Announcements, events and more from Tyee and selected partners

The Tyee is now a non-profit organization. What this means for you

And we have a new logo and a new look. Read all about it here.

The roar of bicycle gears is a familiar background noise in Vancouver. Vintage road bikes, family-friendly cargo bikes and speedy e-bikes are part of the lineup of two- and three-wheelers that criss-cross Vancouver’s 4,500-kilometre network of bike paths. However, some Vancouver cyclists, including those known as “binners” or “recyclers” because they collect and exchange recyclable materials for cash, are more likely to be found riding to go up an alley – or down Clark Drive – rather than using the 10th Avenue Bike Path.

Although the City of Vancouver links cycling to economic, environmental and health-related goals for the city and for residents, research suggests that the health, environmental and economic benefits of urban cycling are most relevant to privileged populations, and that people with fewer economic resources often cycle for other reasons.

Shortly before the COVID-19 outbreak in Vancouver, I interviewed Nelson and four other men who ride bikes and live in the Downtown Eastside. Most of the time I rode alongside them while we talked.

Cycling was a utilitarian part of Nelson’s livelihood as a binner. Two of my other interviewees, Pete and Simon, also used their bikes primarily for binning. Brent and John rode for recreation and transportation. (I use pseudonyms for Brent, John, Pete and Simon for privacy reasons.)

Nelson, who is awaiting surgery for his heart problem and suffers from tendonitis in his left foot, cycled long distances as he collected recyclable drink containers and scrap metal. “I can cycle a hundred miles a day, but I can only walk a few blocks before I start to cripple,” he told me.

All five men found cycling easier on their bodies than walking. The bike also allowed them to get to somewhat remote places, like back alleys, and to carry bulky items, like bags full of recyclables, that other modes of transportation might not have. allowed.

No one I interviewed has traveled by bicycle for environmental reasons. Instead, their bikes helped them get around the city conveniently and kept their health problems from getting worse.

A municipal policy that recognizes the potential of the bicycle as a mobility aid and emphasizes the usefulness of adapted and electric bicycles could benefit many Vancouver residents, including Nelson, Pete, Simon, Brent and John.

The five men rely on community bike shops and the Four Directions Trading Post to repair their bikes and buy new ones when old ones get stolen. These stores and the Trading Post are inexpensive, low-barrier options, and are all conveniently located in the Downtown Eastside or East Vancouver. The only commercial bike shop mentioned by John, Super Champion Cycle Shop, is also located in the Downtown Eastside and is known to serve the needs of its residents.

A community bike shop offered Pete a credit for a new tube, allowing him to pay them back when he could. “When you get your check, you can deal with them,” he said. “[It] kept me on the road for quite a while.

Other important locations, such as businesses, art studios, and residences where recyclers went to collect recyclables, were located on established routes that Nelson, Pete, and Simon called “trap lines.”

Nelson, Pete and Simon tended to visit recycling depots outside of downtown that paid higher refunds than others and offered perks like free coffee, space heaters and friendly staff. The benefits were worth it, but the depots weren’t always easily accessible by bike. To get to a bottle depot, Steve and I crossed an overpass on a sidewalk in the wrong direction to avoid hitting a lamp post or driving in a very narrow and busy vehicle lane.

To support low-income bins and cyclists, the City could provide easy bicycle access to industrial areas where recycling depots are located. The city could also support initiatives that allow cyclists to access low-cost bicycle repair services wherever they are.

Despite driving long hours and diverting large amounts of waste from the landfill daily, Nelson, Pete, Simon and John have not been praised for their health or environmental efforts. In fact, they were all systematically stigmatized by the police and other road users.

Cycling has increased their visibility with police and the general public and made them targets of harassment. They were often arrested for relatively minor infractions such as not wearing a helmet, not having lights on after dark, and riding their bikes on the sidewalk – which the city’s infrastructure often makes necessary on their routes.

Binning also attracted negative attention. Steve noted that he was instantly coded as a criminal when recycling. “A lot of them, cops and regular people, instantly see you as a criminal. Pick up the voids? You’re a criminal,” he said.

Other times it seemed like the police just wanted to make their presence known. Every time police saw Simon riding his bike in his yellow rain gear, he said they stopped at his bike and called him a “rubber duck”.

There is work to be done to reduce the stigma around cycling and poverty. The City of Vancouver could include photos of low-income cyclists and binners on its cycling web pages, and specifically recognize binners in its cycling maps.

The city could also scrap helmet laws, which have been shown to disproportionately affect low-income and racialized cyclists — and create a reason for police to stop and interact with them.

Support all cyclists in the city 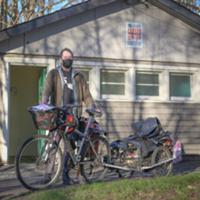 When I checked in with Steve this spring to see how he was doing, and if the pandemic had changed anything for him, he told me binning was in full swing. “I’ve made $30 some nights in just 15 minutes riding seven blocks,” he said.

But he still faces the same issues – harassment, theft, inconvenient routes – that he dealt with before the pandemic.

While adding bike lanes won’t solve social inequities, addressing the needs of low-income cyclists in Vancouver could be a way for the city to include more people in its active transportation plans.

For the men I interviewed, cycling was linked to their identity, health, income, relationships and housing. Including cyclists like them directly in discussions about Vancouver’s cycling plans could be a step towards fairness in cycling.

The city would also do well to recognize the link between cycling and chronic disease and disability. As Vancouver’s population ages, the city should ensure that people with health conditions can move freely, safely and easily around the city.

If we are to achieve our active transportation goals, we will need to ensure that they are suitable for all of our citizens.